Preparing our home on Harmony Road! 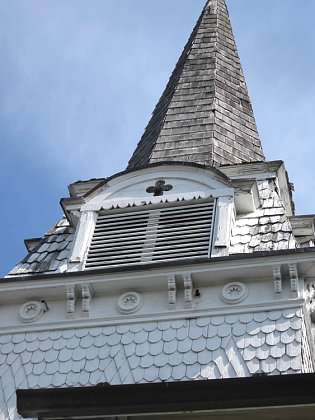 After more than 15 years of worshiping in Jackson schools, Cornerstone entered into a lease agreement with Jackson Township to use the historic church building located at 569 Harmony Road.  This historic church was built in 1844, and restorations were completed in 2018. 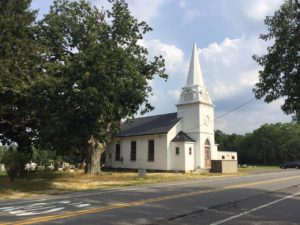 A Short History of the Church on Harmony Road

Church attendance records show that the number of Methodists in New Jersey around 1800 was approximately 3,000. This number increased to over 14,000 in thirty years.  Over half of all New Jersey Methodists were reported to be located in Burlington County and western Ocean County.  The fervent religious revival that occurred near the middle of the 19th century brought 23 new churches to Jackson Township. The Harmony Methodist-Presbyterian Church was the second of nine Methodist churches.  Since this was a very rural area, the original congregation was made up of Methodists and Presbyterians and was called the Harmony Church based on the combination of Protestant faiths.  This became the name of the community and the name of the road on which it stands.

The congregation first met in the barn of Gordon Matthews, a local farmer, in the early 1840s.  In 1844, Silas Newman and John Clayton deeded land to the church trustees for a church building and a cemetery.  Later that year, the original church, a log cabin, was built on the 5.8 acre tract of land but that was not on its current site.  It burned down and was replaced in 1865 at its current location at the front of the property bordering Harmony Road.  In 1886, a vestibule and steeple were added and in 1901 an addition was added to the altar area.  The original porch was added in 1922 and has been modified an additional two times.

A cemetery that is behind the church was established by the original members and holds the gravesites of many of the families that inhabited the area.  Some of the prominent family names are Clayton, Burke, Thompson, Matthews, Pearce, Cook, Applegate, Hankins, Holman, Bennett and Voorees.  Schools and streets are named for several of these original settlers. Gravesites indicate members that fought in the Civil War and date to the mid-1860s as well as veterans that served in more recent wars. One plot is for the family of Reverend Strickland, who served as Pastor for many years in the 1800s.

The church has three beautiful stain glass windows on each side of the sanctuary that were donated by the following families: Clayton family (two windows), Matthews family (two windows), Boswell family and the Pearce family.  They have remained in amazingly good condition for the past 150 years.  The original window that was located behind the altar has been found, and was restored in August 2015.  It will be returned to its original location as part of the ongoing restoration project.

In August 2014, Cornerstone Presbyterian Church entered into a lease agreement with Jackson Township to use the historic building.  Cornerstone has worshiped for more than 15 years in 5 different schools within Jackson, and they are very excited to be worshiping in their first church home.  Restoration began in 2014 and was completed in 2018!  Please contact Elizabeth Hughes (administrative@cornerstonechurchofjackson.org) for more information on the church or the restorations!